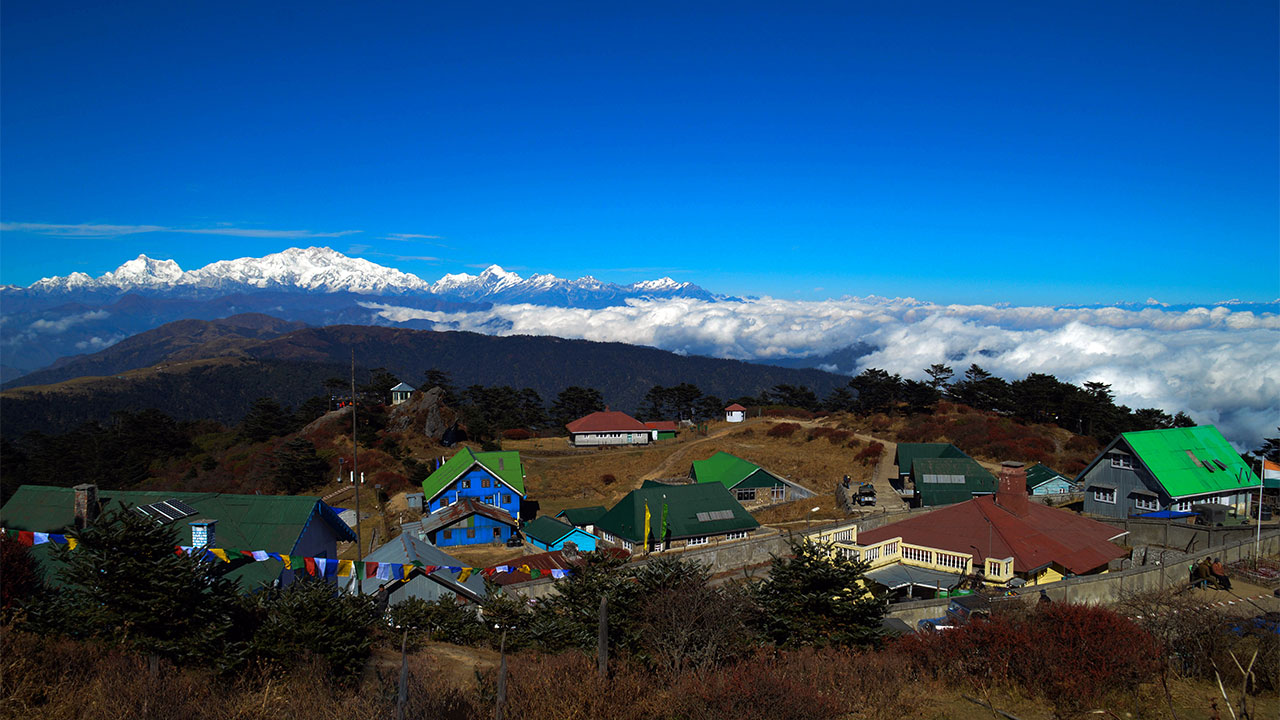 It is one of the top places in the bucket list of mountain lovers because of the picturesque beauty the place offers. Excellent views of Mount Everest, Kanchenjunga, Lhotse, and Makalu can be seen from the summit of Singalila. Added to this, Sandakphu offers the unparalleled beauty of flora and fauna of the Singalila National Park to the visitors. Trekkers and hikers consider Sandakphu to be a place right next to paradise.

Sandakphu features not only various trekking routes in the Darjeeling-Sikkim region but also some enchanting surrounding towns like Maneybhanjan, Chitrey, Tonglu, and Tumling. One can spend relaxing days exploring Buddhist, visiting tea estates, and enjoying the serene ambiance of small mountain towns over here.

Sandakphu has something to offer everyone. This offbeat destination is perfect for trekkers looking for the exhilarating rush of hiking over rocky mountainous terrain, adventurers who want to witness the diverse cultures and local customs of the quaint little towns, or people just looking for a relaxing break from their mundane but busy schedules.

This relevantly unexplored region is a paragon of nature at its finest. With views of snow-capped mountains, towering alpine trees, and colorful wildflowers growing everywhere, this laidback locale has the perfect setting to unwind and introspect.

You will find an idea day-to-day itinerary of Sandakphu right here.

Maneybhanjan, the beautiful small hamlet on the lap of Himalayas, is considered as the gateway to Sandakphu tourism. So, you need to start from there for your Sandakphu trek. According to the locals, the nomenclature denotes the place as the Valley of Stupas. It is located at a distance of 26 kilometers from Darjeeling and 92 kilometers from Siliguri, near the international border of India and Nepal. The village rises to an elevation of 2,150 meters from the sea level. Jeeps are available from NJP Railway Station or Bagdogra Airport to reach there, which takes around four hours.

Tumling is a hamlet of Nepali people at an elevation of 3050 meters. This place is quite popular among the tourists due to the spellbound view of the snow-capped peaks of Sandakphu, Kanchenjunga, and Mount Everest. Due to high steepness, the road appears to be much more challenging for the trekkers. The rhododendron forest, giant magnolias, spruce, and varieties of orchids add to the absolute beauty of the surroundings.

The place is located at a distance of 11 kilometers from Maneybhanjan. On the way, there comes a village named Chitrey, where the trekkers take a short break during their Sandakphu trek, to enjoy the beauty of pine, fir, and birch forests. From Meghma, the Village of Cloud, the road gets divided. One goes towards Tumling, Nepal, while another goes towards Tonglu, India.

Covering a distance of 24 kilometers from Tonglu, the trekkers reach Sandakphu on the third day. Experiencing the sunrise behind Mount Kanchenjunga, leave Tonglu and head towards Kali Pokhri at 3170 meters. Sandakphu offers here an aesthetic view of the way to Sandakphu, through the Singalila National Park. It is the highest National Park of West Bengal.

Among the flora, Rhododendron, Magnolia, Oak, Fir, Juniper, and among the fauna, Leopard, Red Panda, Pangolin, Hornbills, all can be seen there. There is a small, pristine lake called Kali Pokhri Lake, which is considered to be sacred among the locals. Its water is fenced with Buddhist prayer flags and the premises are highly revered in the community.

At a distance of 2 kilometers from Kali Pokhri, there is a valley called Beekeybhanjan, which is known for its medical plantation. But along with beneficial herbs, a large number of poisonous plants are also found there. So, it is recommended not to touch any plant without having proper knowledge about it. Crossing this region becomes the most challenging part of the Sandakphu trek due to its steep slopes and gravelly terrain. But once it is crossed, you will be able to experience the magnificent panoramic view of the highest peak of Singalila and enjoy the joy of vectoring the summit.

After enjoying the most stunning view of sunrise at Sandakphu, on the fourth day of your Sandakphu tour, you can head towards Sri Khola. It is a small hamlet located around 18 kilometers away from Sandakphu. The serene road to Sri Khola will take you through the rhododendron forest near the Dead Valley. The moniker is after a tragic incident the forest suffered. The legend goes that fire once broke out there and the entire forest was burned down to the ashes – almost as if dead.

Surrounded by pine, birch, rhododendron forest, hornbill, and various migrant birds, Sri Khola, on the other hand, offers a soothing experience of resting on the bank of a stream, after the tiresome journey of last 3 days. Generally, Gurdum and Sri Khola are covered together as they are neighboring hamlets. Between Gurdum and Sri Khola, there is a village named Timbure, where quaint little homestays can be found. Motorable road ends at Gurdum, from where you have to trek to reach Sri Khola.

Rimbick, a spectacular village 6 kilometres away from Sri Khola, is simply a place of aesthetics. You can reach there by walk. On the same day you can head towards Tumling.

Situated at an altitude of 8600 ft, Gairibas is one of the most attractive points to the trekkers. From Tumling, the vehicular road goes up to Jhaubari. From Jhaubari, you have to reach Gairibas by trekking. Several cheap dormitories are there, where you may stay at night. This is known as the food point of the trekkers. Momo, noodles, and other snacks are much loved by the visitors there.

On the way to return, you may stop by Phalut. It is the second-highest peak of West Bengal. Located at the Indo-Nepal international border, Phalut is rich with the natural beauty that Singalila National Park has to offer. The indigenous tribes here hold the peak sacred and call it by the name ‘Omna Re Ay’ in their native tongue. They have been worshipping the peak of Phalut for more than 300 years. The place is 17 kilometers away from Singalila Pass.

The forest department owns a forest hut at Sabargram. Sandakphu tourism remains incomplete without a night camp at Sabargram. Generally, you need to carry your own food there. But sometimes the caretaker arranges food for the tourists there. The trekking path to climb the peak comes in a zigzag shape. The last kilometer in the trek appears to be a steeped one.

If you are a mountain lover who never misses a chance to trek through the woods and vales, the Sandakphu trek should be at the top of your must-visit places. So, hurry up with your backpack and quench your wander thirst with this aforementioned list.

Overall Sandakphu enjoys a cold climate, with temperatures ranging from 24 degrees Celsius on a summer day to – 4 Degrees Celsius on winter nights but each season unfolds a different aspect of the endless beauty.

Summers in Sandakphu are mild with clear skies and temperatures ranging between 24 degrees Celsius in the daytime to 12 degrees Celsius at night. Summer usually starts in April and lasts till mid-June

The last weeks of June see the arrival of monsoon which lasts till mid-September. The weather is cloudy with moderate to heavy rainfall with temperatures ranging between 10 to 20 degrees Celsius.

Sandakphu experiences short autumn from mid-September to October with crisp pleasant weather and temperatures ranging between 8 to 18 degrees Celsius.

Winter usually lasts five months, from November to March with January being the coldest month of the year. Snowfall generally starts by the end of December and continues through January covering the entire landscape in a white layer till the end of March when the snows begin to melt with the rising temperature. The temperatures in winter can drop as low as – 4 degrees Celsius at night and 10 degrees Celsius in the day.

Sandakphu is guaranteed to be a memorable experience no matter what time of the year you visit it. Its moderate weather conditions make each season a new event to witness.

Summers (April to June) in Sandakphu can be a bright and colorful affair with varied species of flowers blooming all over the valley covering it like a pink and red carpet. The mild days and cool nights are both suited for exploring the natural beauty of the area.

Monsoons (June to September) bring lush greenery but also rainy weather which is best spent being cozy indoors. Therefore it might not be the best time to visit since most outdoor activities are limited due to the slippery terrain and danger of landslides.

The clear blue skies characteristic to autumn (September to October) offers a spectacular view of the magnificent mountains. This season most popular for trekking expeditions. Camping beneath the stars and waking up to a picturesque sunrise can be truly awe inspiring sights, as can the blaze of autumn colors all over the valley.

For those who want to experience snow, winter (November to March) would be the best time for Sandakphu. The snowfall is mild and can be enjoyed without being in danger or getting snowed in for the entire season. Moreover, winters in Sandakphu are known for its colorful skies in the twilight hours. Though the nights can get extremely cold, it is manageable if you are well equipped with warm winter wear.

Sandakphu is at its peak during summer (April to June) and autumn (September & October) when temperatures are mild and the weather pleasant, with clear skies that allow a splendid view of the mountains. These seasons are ideal for outdoor activities such as trekking or simply exploring the outdoors without having to endure harsh weather conditions.

October is the best time to visit Sandakphu as the monsoons are well over by this time and winter is yet to arrive. The weather is optimum at this time of the year and it is comfortable both indoors and outdoors.

How to reach Sandakphu

Sandakphu is a well-connected tourist attraction where you can reach from any part of India. If you’re planning to go via flights, then the nearest airport to reach Sandakphu is Bagdogra near Siliguri.

Before booking a flight to Bagdogra one must check the flight schedules. However, many flights operate throughout the week to Bagdogra, namely SpiceJet, Air India, and Jet Airways. It is approximately a distance of 115 kilometers from Bagdogra to Sandakphu. If you’re living in major cities like Kolkata, Chennai, Delhi, or Mumbai then you can avail direct flight to reach Bagdogra.

Traveling by car or bus can be hectic but you’ll enjoy the best picturesque view of the Sandakphu. Bus services are also available from SNT and other bus stands in Siliguri. You have to book a bus from Siliguri following the time table to reach Maneybhanjan. From there you have to trek because there are no more fixed bus routes.

If you’re a nature lover and always try to find a chance for trekking, then Sandakphu is the best-fitted option for you.