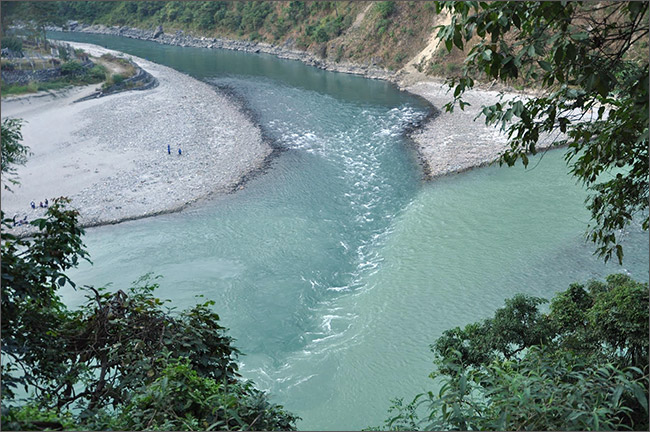 Teesta is the main river that flows between Sikkim and Darjeeling. The river is 315kms long and its origin lies in the Tso Lhamo lake of North Sikkim, at a height of 5330m. The lake itself is located 4km away from the India-Tibet border. The river ultimately enters Bangladesh through West Bengal and then meets the Brahmaputra river at Fulchori, which is in Bangladesh.

The Teesta river is also known as Tista. The river is one of the main attractions in Darjeeling as it not only offers spectacular views but also adventure sports. Adventure sports enthusiasts from all over the world visit Darjeeling to try the adventure games at the river.

There is much debate over the true origin of the river Teesta. Some locals believe that the river originated from the Teesta Khangse glacier or the Pahunri glacier which is located at a height of 7068m near the India Tibet border. But scientists and researchers have not been able to find any evidence that could prove this theory.

Apart from the origin story, the river also has a history behind its name. It was named Trisrota which later on become Teesta because the original name was a mouthful. Trisrota means consisting of three streams.

According to the historical records, the river changed its course after a flood in 1787 that caused a lot of devastation. The river used to flow in three channels Atrai at the center, in the east Karatoya, and the west Punarbhaba. After the flow, the river course changed to its current course.

The course of the river Teesta

Several other towns in Sikkim fall within the course of the river Teesta, like Rangpo, Singtam, and Mangan. At Rangpo which is the border town of Sikkim, the river leaves the state to finally flow into the Darjeeling district of West Bengal. The river kinds of forms a natural border between the two states of India, Sikkim and West Bengal.

At the Teesta bridge, the river Teesta meets its main tributary called Rangeet. This confluence of both the rivers is called Triveni. This is a major tourist site. Soon it leaves Darjeeling at Sevoke to enter Bangladesh. Once it enters Bangladesh, the river then meets one of the main Rivers of Bangladesh, the Brahmaputra.

Two main bridges have been constructed over the river – the coronation bridge and the Teesta bridge. The Teesta bridge is one of the busiest bridges as it sees a lot of traffic going in and out every day. The bridge connects all three major cities Kalimpong, Darjeeling, and Sikkim.

Before the present Teesta bridge was built there was another concrete bridge at the Teesta bazaar. The concrete bridge could not stand the wrath of mother nature and was destroyed by flood in the year 1968. The military at the time built a suspension bridge which was a temporary solution.

The coronation bridge is also known as the Baghpool or the tiger bridge since there is two tiger statue at the end of the bridge. The bridge has a history behind its construction which has to do with the British royalty.

The bridge was built in honor of the coronation of Queen Elizabeth and King George VI in the year 1937.  Although construction began in 1937, it took nearly 4 years to complete the bridge, and the bridge was completed in 1941.

The coronation bridge is located on Sevoke Road. The bridge connects the two districts of West Bengal, Jalpaiguri, and Darjeeling.

Things to do at the Teesta river

The bridge offers a splendid view of the confluence of the two rivers. You can see how different the color of the water looks and how they become one. While Teesta looks muddy green, the River Rangeet has clear deep green waters. This is the perfect place to take some pictures to capture this fine view on your camera and your mind.

To capture the great view in all its glory you can also go to the Peshok viewpoint. The viewpoint offers you a panoramic view of the entire landscape.

Teesta Bazaar is a small town that is located at the intersection of Siliguri Gangtok National Highway. The town is famous for its handicrafts. If you are a shopaholic and you love shopping for trinkets and traditional items you will love this little bazaar. You can buy beautiful lanterns, crockery pieces, silver jewelry as well as thangkas, which is are traditional scroll paintings.

The Teesta river is flanked by trees and moss alpine Vegetation which makes it perfect for white water rafting. The river has become a hotspot for white rafting!

You will have a guide with you at all times who will guide you through the entire activity. Usually, white water rafting in Teesta offers two options to sports enthusiasts, you can opt for the 4km rafting or the longer 7km rafting. If you are a beginner it is recommended that you opt for the short rafting course and not the longer one.

You must carry a valid identity proof and an extra pair of clothes to change into after you are done.

The nearest airport to Darjeeling is the Bagdogra airport, Siliguri, West Bengal. The airport connects to Delhi, Kolkata, and Guwahati. From there take a cab to Darjeeling.

Take a flight to Bagdogra airport, Siliguri, West Bengal and from there hire a cab or take a bus to reach Gangtok. You can also opt for a helicopter ride which takes nearly twenty minutes to reach Gangtok from Bagdogra. The helicopter is operated by the Sikkim Tourism.

There is also an airport in Sikkim, the Pakyong Airport at the Pakyong town, but since it started operating just recently it does not have direct flights connecting major cities in India, which is why you are better off flying to Bagdogra.

The nearest railway station to Darjeeling is the New Jalpaiguri station which connects to other major cities in India like Kolkata and Delhi.

Reach the New Jalpaiguri station in Siliguri and then take a cab or a bus to reach Gangtok. It can take you 5-6 hours to reach the capital city in Sikkim. There is no railway station in Sikkim, unfortunately.

After you reach Siliguri you can take a cab to Darjeeling. The roads are connected to Kalimpong and Gangtok as well as apart from Siliguri.

If you want are interested in white water rafting in the Teesta river you will have to reach Gangtok, which is in the state of the Sikkim.

From Siliguri, you can take taxis or a bus directly to Gangtok. You can also find direct buses from Jalpaiguri, Bagdogra, and Kolkata.

If you are planning to tour the Northeastern part of India, you cannot ignore the major states like Sikkim and the scenic hill station Darjeeling. Both of these are connected by the river Teesta which itself offers some splendid view that will satisfy your thirst for traveling and of course some thrilling adventure sports like white water rafting!