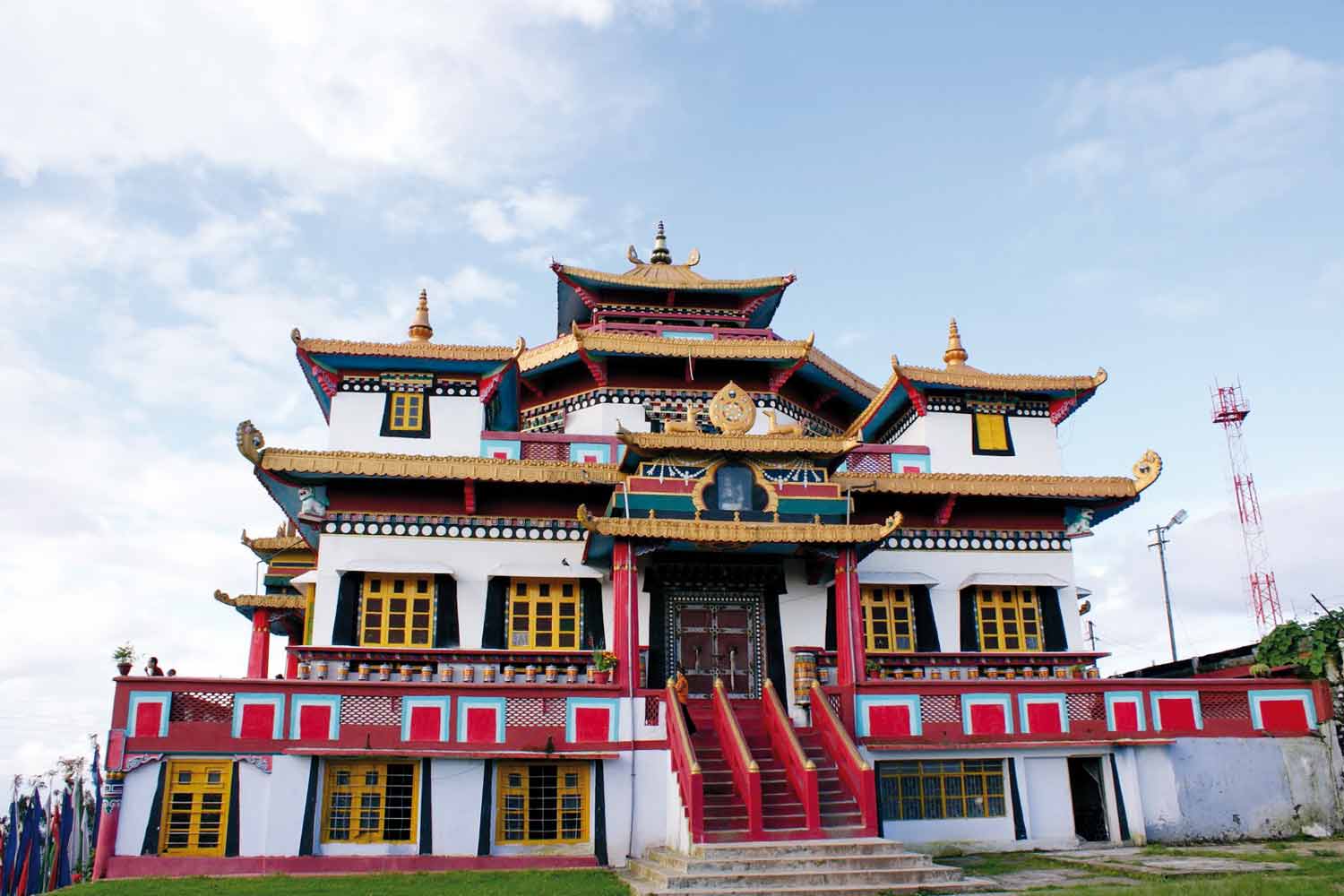 Durbin, as is popularly known, has a vast Diaspora of flora and fauna which is a treat for anyone visiting this site. Durbin can be referred to as a triple threat, this is because it is at once a leisurely tourist spot, a religious site for the Buddhists, and a base for the Indian Army, the latter because of Kalimpong’s close proximity to the international border.

Enjoy the ethereal silence of nature at Durbin Dara

Durbin is roughly 5km away from the main town and transport is easily available to be it shared or reserved modes of transport. Though there are a number of striking locations in and around Durbin, the one thing that separates it from other tourist destinations is that Durbin seldom feels like one. The air is fresh and noticeably cooler and you can clearly hear the swishing of the trees and the chirping of the birds.

This is predominantly because of the fact that Durbin Dara is huge and also because of the Army Base, there is a sense of calm and discipline in the area. It has been widely observed that Durbin and the surrounding hills have been frequented by various migratory birds, it is not uncommon to spot exotic birds like the Himalayan Monal and Himalayan Shrike- Babbler here. The area is surrounded mostly by pine trees but one can spot oak and maple trees as well.

Various species of Rhododendrons are found here as well. Seasonal flowers like Sunflowers and Cherry blossoms also amps up the already beautiful region. The best time to visit to be witness to these wonders of nature is during the spring and autumn seasons.

Exciting Attractions in Durbin Dara to Pay a Visit

Another reason why the Zang Dhok Palri Monastery is unlike any other in the area is because this is the only monastery where you can also enter the sanctum sanctorum & take photographs. The Monastery is open to the public during the day and you can spend a quiet day here in the monastery premise in your own state of being. One of the most unique experiences is when the monks are chanting their prayers and the sheer power of that will uplift your mood immediately.

The experience of visiting a monastery is unlike any other because there is always a visible shift in energy and a lightness of being and here at the Zang Dhok Palri Monastery that experience is multiplied manifold because of the stunning and deserted location. The monks here are very friendly and may even speak to you and explain to you about their day to day activities. Sometimes they will be more than happy to pose for a photograph with you.

There are a few canteens outside the monastery and around Durbin Dara which serve some lip-smacking local cuisine. These roadside canteens serve piping hot momos and Thukpas. The experience of having hot momos on a cold rainy day is something else altogether. Something unique to Kalimpong is the “Alu-Thukpa” and “Fumbi” a savory cake-like preparation made from Moong Dal. These are served with some hot sauces, anyone visiting Kalimpong should try these because these are the local cuisine and offer a taste of what life in Kalimpong can be like. For the ones who like their alcohol, the famous rice beers called “Tongba” locally is a must-try.

Your Ideal Accommodation at Durbin Dara

If you are a tourist and are seeking accommodation in and around Durbin Dara, Morgan House is the ideal place. The Morgan house is a century-old property built for a British jute baron and his young wife. The typical British construction was meant for their summer sojourn where the owners would host large parties. This property is almost like a throwback to the British heritage and Victorian-style architecture. It is one of the few remaining marks of the British Raj remaining in Kalimpong. Besides the obvious perks of staying in a heritage hotel, Morgan House offers some picturesque view of the surrounding hills and also the Kanchenjunga.

As of today, Morgan House has been converted to a boutique tourist accommodation under the West Bengal Tourism Development Corporation (WBTDC), a government enterprise. Initially, it was named Singamari Tourist Lodge or Durbin Tourist lodge. The Morgan house has been host to many luminaries and celebrities alike including the first Prime Minister of India Mr. Jawaharlal Nehru, famous singer Kishore Kumar, actor Uttam Kumar, actress Nargis Dutt, and many others. The tourist lodge offers 7 rooms in 5 different categories. Morgan House is located at a distance of about 2Km from the main town and is adjacent to the Kalimpong Golf Course.

Spots Not to Miss in Durbin Dara

Directly opposite to Morgan House is another prized destination that tourists cannot afford to miss, the Kalimpong Golf Course. It is often referred to as one of the most beautiful golf courses in India. This immaculately manicured Golf Course has a 9hole crest and is a treat for golf lovers; it is developed in hilly tracks and at a high elevation has made it prominent and outstanding. The golf view hut installed here gives you an opportunity unlike any other golf course to enjoy the sweeping view of the entire surroundings.

This is a military establishment so there is an air of silence and discipline all around, this aids in making just a visit to this course something that will elevate your mood. Mind you this is often cited as a very difficult course for golfers because of the uneven terrain and unpredictable weather. You may see the military officials swinging their clubs without abandon in their leisure time here but one has to seek permission from the officials if you want to have a go at this course. Legend has it that this course was constructed for the military men to get used to the harsh climate.

Durbin Dara gets its name from the Nepali word for Binoculars and true to its name this place offers the single most stunning view of the Tribeni which is the confluence of the three most important rivers of this area. There are many spots in Durbin which offers some stunning views of everything from the mighty Kanchenjunga to the rivers flowing between these hills. Chief among these are Puchey Dara and Badarey Bhir (Monkeys Crest), these are some of the spots which are truly hidden gems and not many people are aware of. These spots are ideal for photography and also to just sit and watch the magic that nature is, you can watch the sky change shades from brilliant vermillion to all-consuming azure.